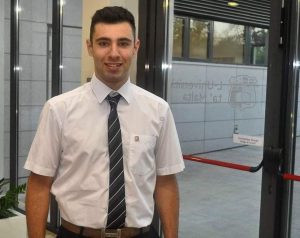 My 20-year-old son is dyslexic.

His childhood was perfect and adventurous so, at that time, it hardly occurred to me that he might be dyslexic.

He always approached everything with a smile and this made it more difficult for me to understand if he was joking or if he truly mixed up the words.

But as time went by, I started facing several school notes and frequent calls from the school administration where they too weren’t sure. They blamed me for organising many afterschool activities and not leaving enough time for studying.

Looking back at those times, I can remember how we cried together.

When I heard about the word ‘dyslexia’ I searched and read about it for a whole week. It was like a door opening and I realized and understood that my son was dyslexic.

The journey wasn’t easy since, at that time, if you only had dyslexia, most schools hardly provided any access arrangements. My son wanted to learn, and he wanted to succeed too. This led him to severe anxiety, as no support was offered from the school.

His panic attacks were very disturbing and so we had to do several tests like EEG. Finally I decided that my son’s health was a priority and did not send him to school for a whole year, until he started feeling better and stronger. And since my son had to take the medication and he had to refrain from attending his sports clubs, I had to take a very drastic decision.

I decided to change school – and thank God we did. In the new school, he found the best dedicated teachers ever. I started seeing that sparkle in his eyes again.

Having his self-esteem back, he continued with his favourite sport, karate and, within months, he competed and qualified 3rd in European Championship.

After that, he never looked back and started studying hard for his O & A levels.

Today he is in his First Year at University, studying Electrical Engineering.

In my opinion, all dyslexics should be given all the rights to learn according to their needs, as otherwise this would truly be discrimination.