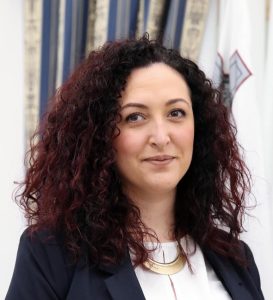 Ms Samantha Pace Gasan, who is 27 years old, graduated with a Bachelors (Hons) in Social Policy in 2016 and recently obtained a Masters in Creativity and Innovation. In the latter, Ms Pace Gasan focused her studies on social innovation in small and medium enterprises in Malta.

Throughout her career, Ms Pace Gasan has worked for various entities, including MEUSAC where she assisted various organisation in accessing European funds, and the Faculty for Social Wellbeing at the University of Malta, where she worked as a researcher and coordinator of various programmes between the Faculty and various social entities. Throughout the last year she and her colleagues worked on research about the impact of COVID-19 on persons with a disability.

Ms Pace Gasan started her journey in activism from a young age. She was a member of the Malta Girl Guides and other NGOs. In the Malta Girl Guides she formed part of various committees, including those focused on diversity and the promotion of the rights of minorities. Eventually, she also served on the National Board where she represented youth.

Ms Pace Gasan was also part of the National Youth Council where among other initiatives she worked on proposals regarding youths’ sexual health, the student association Studenti Ħarsien Soċjali, and was a founder of the Network of young Women Leaders, which had the primary aim of aiding young women with different experiences to grow in leadership.

With the appointment of Ms Pace Gasan, the Maltese Government sent a strong message, that Malta looks at the word ‘disability’ from a wide spectrum, in line with this year’s United Nations theme, that not every disability is visible.

At the age of 24, Ms Samantha Pace Gasan was diagnosed with a rare disease and acquired a visual impairment less than 3 years later. She experienced the disability sector from different perspectives as in 2001 her sister, Naomi Pace Gasan, was born with Down Syndrome. Ms Pace Gasan therefore also understands the perspective of and empathises with persons with disabilities themselves as well as family members.

Despite the challenges that transition brings, Ms Pace Gasan looks at life positively, accepting the disability as a part of her identity and choosing to explore ways that enable her to continue having a good quality of life.

Ms Samantha Pace Gasan was appointed as the second Commissioner for the Rights of Persons with Disability on the 20th January 2021.

This site uses cookies. If you continue we'll assume you're OK with that.OK